Sticky liquid coming out during sexual arousal is Precum.
It is natural and beneficial for the sex act.
Excess release of precum, colloquially known ‘chip chippa paani’ does not cause any harm.
It may or may not contain sperms. 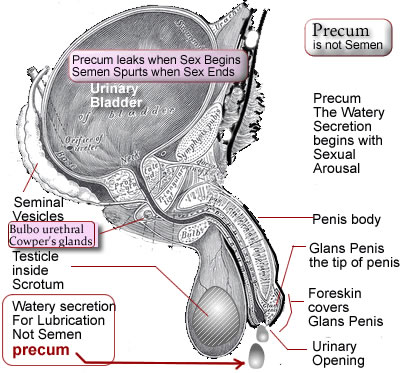 Precum  (pre-ejaculatory fluid, pre-seminal fluid, or Cowper’s fluid) is the clear, colorless, viscous fluid that comes out from the urethra of the penis during sexual arousal.

It is not semen, it is similar in composition to semen but has some significant chemical differences. Its secretion is the normal physiological process of the body.

When does Precum come?

Precum (Pre ejaculatory fluid) can be compared to watering of the mouth that happens when a hungry person smells the aroma of delicious food being cooked and is about to be served.

From where does precum come?

What is the quantity of precum?

The amount of precum released varies from person to person. Some men may not produce precum. Some men may produce up to 5 ml of precum. So whatever the amount the man produces normally is normal for his body. Typically the underwear gets a wet patch because of the precum.

What is the wrong belief about precum?

People often get scared and immensely worry due to the wrong belief that semen has discharged before sexual intercourse.

But the fact is, it does not contain sperms, so there is no question of semen loss arises or weakness.

Why does precum come?

Can Precum cause pregnancy?


It was believed that precum also may contain sperms. Hence, it was said that contact of precum with vagina or nearby may cause pregnancy.

However, there are some studies that show that:

A study by Jones R.K., Fennell J., Higgins, J.A., and Blanchard K. (2009) shows that pre-ejaculate does not contain sperms. The studies also show that the withdrawal method or coitus interruptus as the best family planning method as it is effective in preventing pregnancy.

But, this is debated.

Sperm may leak into the precum, and there can be rare chances of pregnancy, even if the woman is nearby her ovulation, as sperms remain alive for 4 to 5 days in the reproductive tract of the female.

How can I stop precum?


There is no need to stop precum.

It is natural and beneficial to your sex process.

The release of precum does not cause any harm.

Can precum pass the AIDSto the partner?


Studies have found the presence of HIV (Human Immuno-deficiency Virus) that causes AIDS (Acquired Immunodeficiency Syndrome) in precum. So it can pass to the partner during sex.

So, it is safe to use condoms as a precaution.